Thank you those of you who have sponsored me so far. Everyone else, read the post titled “Race For Life“.

And now back to your regularly scheduled programming:

The Glastonbury Festival (aka Pilton Pop by locals) is over for another year. Two years this time actually. Not having been this year, I have no funny stories for you, so I will content myself with a quote I found in the Guardian last week. I’m not saying that I agree with this quote, just that it amused me: “I vowed that Glastonbury, like dating an Arsenal fan, is something which should be experienced once and then never thought of again”. 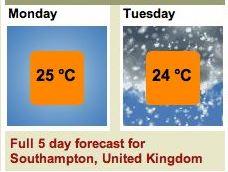 This is not photoshoped, or saved from the winter, or anything like that. It is the gods-given truth: according to the BBC Weather service, on Tuesday the 28th of June 2005, it will be 24 degrees celsius (a rather warm summer day for the UK), and snowing. Yes, snowing. *update* It, surprisingly, didn’t snow. It was rather warm and sunny all day, with (if I remember rightly) a bit of thunder and rain the late afternoon. They did have a hail storm in Idaho though!

In an article about the Barbary apes on Gibraltar, the NYT felt it had to remind its readers that the apes wait “expectantly for a tourist to toss them a handful of potato chips, which the British call crisps.” Damn the NYT for clearing up one of the potential traps for unwary tourists. Hours of fun could have been had at the expense of hapless individuals asking for chips in a pub and being bemused when they get given a plate of fried King Edwards! Damn them.
Continuing in the saga of the Barbary apes, the monkeys now (apparently) suffer from tooth decay, and ” Nobody is supposed to feed or touch the monkeys, which carries a fine of nearly $1,000. The last time someone was punished for the offense, though, was 1918.”

This is classed as news?! Online maps are often wrong. I thought that that was common knowledge. Remembers trying to get round Guilford relying on a map from yahoo. *shudders*

OOOOOOOOOOHHHHH!! Trailer for King Kong. I’m not a fan of large monster/dinosaur/lost world type movies usually, but this intrigues me. I like the premise of a movie within a movie. Plus it’s got Jack Black (always good for a laugh) and Adrien Brody (tasty!). Looking forward to this one. 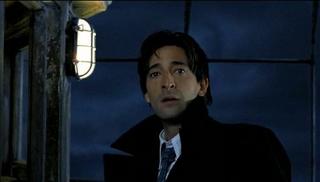 Can I have one please?

Ok click the link and guess the film. LotR, or King Kong? (It’s the latter, but it sure looks familiar, don’t it?)

Now I am, quite unashamedly, a bit of a Richard Dean Anderson fan. I came to him late in his career (Stargate SG:1), but still, a fan none the less. So, when the Nordic Ninga told us over lunch yesterday that he had died, I was a little bit shocked. Poor Chris III was devastated – Richard Whitely and MacGyver in the same week! (Then the Irish Lass joked that Mr T was also dead, and I thought the poor chap would have a heart attack, but anyway). But, doing a bit of a search on the internet, I can’t find a single trace of this story anywhere. Is it true, or not?!
Whilst I was searching, I did come across the following picture. Warning: rather 80’s hair-do awaits at the end of the rainbow. Look away if you are of a delicate constitution. Richard Dean Anderson: go to the ‘Biography’ page and laugh…

“Millions of deaths and incalculable property damage seem like pretty expensive family therapy, but it’s heartening to know that even an alien invasion can provide an opportunity for learning and growth”. – NYT on War of the Worlds
“Indeed, so terrifying and resonant is the surprise attack that one hopes George W. is next door watching Dukes Of Hazzard lest he cite this new â€˜alien threatâ€™ as a pretext to invade Iran”. – Empire on War of the Worlds

Wind farms! Council backs wind farm. Now, I like wind farms, so this makes me happy. As an archaeologist, I feel I should be a little concerned because (according to the BBC) their installation might damage some archaeology. But (and I think that saying this will get my lynched by my collegues), there are times when the destruction of archaeology just has to happen. Look at the damage being done at the T5 site at Heathrow. It’s ok to destroy archaeology to build another terminal at an already enormous airport, but not to put up a wind farm that will have 1) Less impact on the environment and 2) not, you know, add to pollution etc?

Money back on cinema tickets. So this is only in the states at the moment, but it does seem a little odd to me. What is to stop you watching a film then getting your money back even if you enjoyed it? And to do this repeatedly time after time? Half of the fun (ok, maybe not half) of going to the cinema is that thrill of ‘will it be worth the money’? Yes, I like the thought of cheaper tickets (hence Orange Wednesdays), but something in my baulks at getting my money back. It seems like cheating. I don’t know, it might be just me…

It really is easy to amuse me. Go to this site and watch the King Kong trailer in English (to refresh your memory of if you haven’t watched it yet). Then watch it again dubbed. The German one is a little odd, but as I can speak German, not that odd. The Spanish one did amuse me! As I said, I am easily pleased.