Moose, and myself took ourselves off to see the 1050 am showing of The Hitchhiker’s Guide today. The Cute Canadian couldn’t get over his shock at going to see a film in the morning – even though it is up to 50% cheaper, quieter, and you don’t have nasty tall people sitting in front of you. His loss. What did I think of the film? Meh. Some enjoyable moments. Martin Freeman was a damn good Arthur, Mos Def was good as Ford, and Sam Rockwell had some good moments as Zaphod. Alan Rickman was an inspired choice for the voice of Marvin, as was Stephen Fry for the Voice of the Guide, but neither of them were used enough. Bill Nighy did a good turn as Slartibartfast as well. I did not like Zooey What’s-her-face as Trillion. Nor did I see the reason for the love story! As for the Humma story arc, that just seemed like it was written as an excuse to get John Malkovic in the film. Totally unnecessary. One of the main reasons I didn’t like this as much as I was hoping, is that I know the books and radio show well, and the BBC 1981 tv production still rules all as far as I am concerned. There were a few giggle moments in the film, but when you compare that to almost continual hysterics whilst watching the first episode of the BBC version last night, giggles aren’t that great.
Two and a half penguins

I got a new pb on both the rower and the treadmill at the gym today. And I equalled it on the X-Trainer. I must be getting a bit fitter! I am now totally knackered and I know I am going to regret it in the morning, but I am starting to get an idea why people do this keep fit thing – it’s a drag to get me to the gym in the first place, but once I am there I (sort of) enjoy it, and if I miss a session, then I feel a bit pants. I wouldn’t go so far as to say I was a gym-junkie though!

Most unbelievable celebrity relationship so far: Tom Cruise and Katie Holmes (or Avalanche Face as I now have to call her, thank you Jo and Paulette). Apparently she said back when she was 17 “If I did marry, marrying Tom Cruise would be nice…” (I paraphrased a bit, but the meaning was the same). So, does that mean, if I say often enough “I want to date Matthew McConaughey” it will come true?

Got to love that ‘next blog’ button. I spent a good half an hour last night listening to Frou Frou and skimming through what blogspot has to offer. I even found two that got bookmarked into the ‘interesting blogs to look back on when REALLY bored’ folder. I wasn’t overly impressed by the radomness though – a good ten times, I got a blog I had already seen. Considering the number of blogs out there, the odds against this are rather small. It did intrigue me. Whilst I did waste a large chunk of time that I should have spent doing research into computers/archaeology/museums for a large essay due in soon, I did come away with a new pic of Johnny Depp (*drool*) and a VERY comical one of Miss Avalance Face herself. 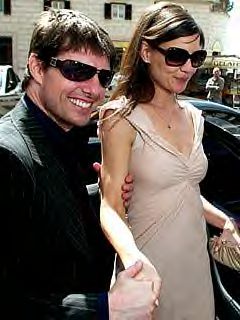 With regards the title-competition: RIB, yes, you’ve been right both the last times, but guessing where they are from isn’t enough. You also need to tell me what the link is, and there will be a link between the content of the post and the title. You might have to twist your brain 90 degrees to the normal, but there will be a link.